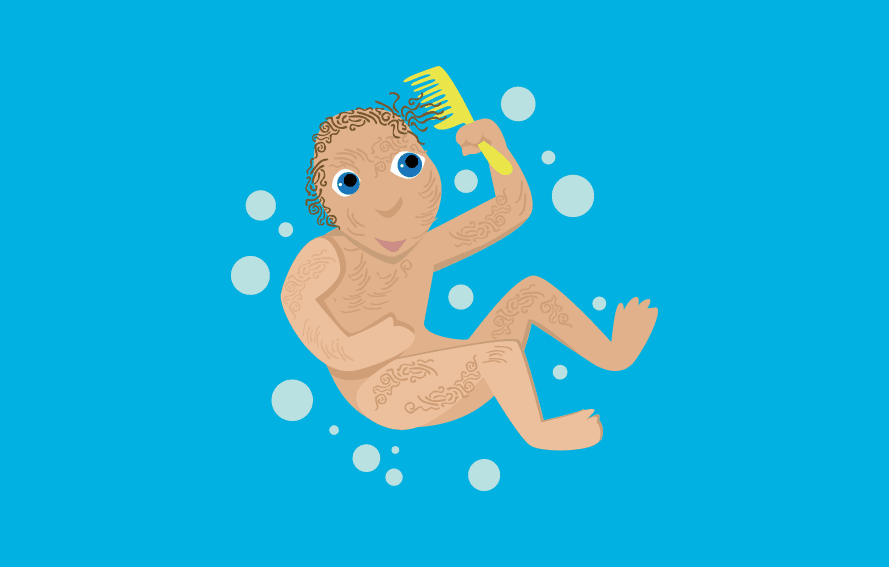 At some point between 18 and 20 weeks, you’ll probably have an ultrasound. While more and more of us are getting at least one first-trimester ultrasound these days, the big midway-point ultrasound is still the first glimpse a lot of women get of their babies. (Midway-point. Really. We’re practically there, oh. Mygod.)

There really are a slew of medical reasons for this ultrasound since the baby’s organs are clearly visible and many medical issues and potential problems can be spotted, but of course, the Big Reason many of us get super jazzed about the ultrasound is because of the Big Reveal of the baby’s sex.

(Side note to everybody everywhere who talks about this ever: Sex is biological, as in male and female and X and Y chromosomes. Gender is a social construct of what constitutes feminine vs. masculine behavior. Therefore, you are learning the baby’s sex, not its gender. Thank you. Love, Amy’s Explody Head.)

Of course, sometimes your baby doesn’t cooperate and remains tightly leg-crossed throughout the exam. And it seems like everybody knows somebody who was told one thing at the ultrasound and were completely surprised with the other at birth. (I don’t, personally. At least not first-hand, or even a reliable second-hand. While I don’t doubt for a second that it DOESN’T happen, most of the instances I was warned about while stocking up on blue last time had a bit of that “my cousin’s roommate’s best friends” vibe to them.)

If you aren’t 100% convinced, scan those photos and get thee to the Internet, where there is a huuuuge community of armchair ultrasound experts who would be more than happy to analyze and interpret your child’s bits. (And know that third-trimester ultrasounds are becoming more common as well, particularly if you’re over 35 or go past your due date, and you can always ask for confirmation then as well.) (I totally did this, because omg! Didn’t you hear what happened to my friend’s cousin’s roommate’s best friends?)

If you DON’T want to know, you can still have the ultrasound and even keep your eyes open the whole time — just tell the technician to keep that area off the screen as much as possible and to offer no hints or interpretations. I was POSITIVE Noah was a girl for most of our ultrasound as the tech merrily moved the wand from place to place, checking measurements and organs. I have NO idea what I was really looking at, but it sure as hell wasn’t what I thought it was, because once he asked us if we wanted to know the sex and moved the wand to the correct area…well, there was noooooo mistaking that we had ourselves a son. But until I was told what I was specifically looking at, the only thing I could accurately identify most of the time was his giant head, and even then I probably might have been looking at his butt.

So what if ONE of you wants to know and the other one doesn’t? Well, as the mother and principal gestater, I tend to say you should get your way and be allowed to make the final call. But I know it’s not always that easy. I don’t have any super-creative ideas or solutions, since we’ve always been more or less in agreement. Jason has never once wavered on his desire to know as soon as possible with both pregnancies, and while he pretended to indulge my harebrained idea to not find out this time, he knows me well enough to know that when push came to shove and that baby was on the ultrasound screen, I would cave and beg and plead for a peek between the legs. (We all took our best guesses at 12 weeks, but will be getting another look and hopefully a for-sure answer at 20.)

The best solution for couples who disagree seems to be the “results in a sealed envelope” tactic. So if the hold-out changes his or her mind, you can choose to open the envelope together and ta-da! Hooray. Or you can send it through the paper shredder together and remove the temptation completely.

The thing is…you’ll be surprised at 18 weeks, or 20, or 40. If you love the mystery and the wait, then this is by far the biggest and most exciting mystery you’ll ever wait for. If you cannot stand not knowing as much as possible about this baby, knowing the sex can play a huge role in your prenatal bonding. I was hugely surprised last time at 19 weeks, and this time I’m feeling more and more like I’ll be getting another surprise at 20. Or maybe this baby will be modest and we’ll get our surprise at 40 weeks. There’s no real wrong answer here, provided that everything is healthy and fine and this little boy or girl stays put until he or she is fully cooked, amen.

Oh Yeah, This:
The aforementioned bladder difficulties and the sudden importance of Kegel exercises. There is a certain baked-potato-sized human pummeling my bladder right now and every sneeze or burst of laughter or hell, just standing up to walk across the room is fraught with incontinent danger. AWESOME.

New This Time Around:
Probably the biggest reason we’ve decided to find out the baby’s sex is because we’re clueless as to how to explain the baby to Noah without at least being able to describe it as a baby brother or sister. So far our attempts to talk with Noah about the baby in Mama’s belly have gone completely over his head — he might retain the vague notion that there’s a baby in there for a few minutes, but it’s not sinking in at all. We bought a “I’m a Big Brother!” book and I figure I’ll get him a toddler-sized baby doll and we’ll work on bottles and diapers and no, we don’t pick up babies by their eyeballs, honey, but beyond that, I’m still sensing he’ll be in for a HUGE WORLD-ROCKING SURPRISE in a few months, and I might as well be spending my time having deep telepathic conversations about babies with my dog.