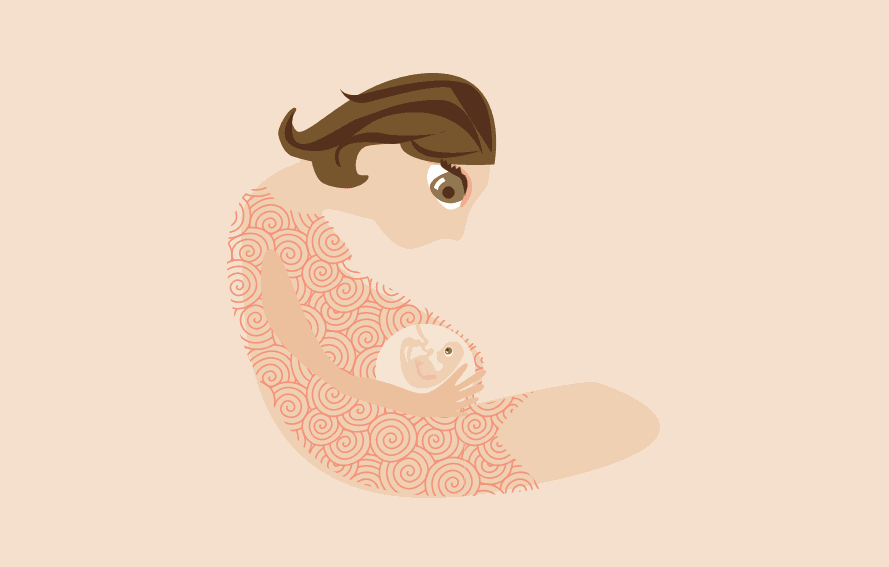 Seriously. You are halfway through this pregnancy, which may bring to mind such deep thoughts like: “Yay!” or “Uh-oh” or “Whoa” or “Must. Organize. Kitchen. Cabinets.”
Let’s talk skin today. Oh, but your poor skin takes such a beating during pregnancy, from itching to rashes to stretch marks to breakouts to other just plain weird stuff.

First up, stretch marks. Don’t kid yourself. There’s nothing you can do to prevent stretch marks. You will either get stretch marks…or you won’t, and no amount of cocoa butter is going to change that. According to Wikipedia, one lone study claimed that a daily application of one lone type of cream was “associated with fewer stretch marks during pregnancy.” Fewer. Which is good, but again, there’s no surefire method of absolute prevention. About 75 to 90% of women will get at least some marks during pregnancy, usually in the third trimester. I’ve heard that there seems to be some genetic connection, so if you’re wondering if you’ll be one of the lucky unmarked few, ask your mom if she got them. My mom had three mark-free pregnancies in her very early 20s and then got them when she was pregnant with me at 35. I figured I had a decent shot at avoiding them, but I broke out in the thin, white silvery kind all around my belly button right at 38 weeks. This time I don’t seem to be getting too many new marks yet, but my existing ones are much darker and more prominent. Eh. I freaked OUT last time at the sight of them, but now I know they really do fade with time and are barely noticeable to anyone other than me. They’re your battle scars, and you might as well get ready to wear them proudly.

Next up, the “mask of pregnancy” or chloasma, which usually crops up sometime during the second trimester. This involves brownish or yellowish patches of skin — it can show up anywhere, but is most commonly noticed on the upper cheeks and t-zone. Pregnancy hormones, for whatever reason, can stimulate extra melanin production in your skin and create a not-super-great blotchy look to your face. (Oral contraceptives can cause the same thing, incidentally.) While a lot of people seem to assume blondes and lighter-complexioned women are more prone to chloasma, it’s actually more common for brunettes and darker-skinned women. Like stretch marks, there’s nothing you can do to 100% for-sure prevent it from happening, although limiting your exposure to UVA and UVB light and wearing a broad spectrum sunblock on your face can really help.

And then there’s the linea nigra, that weird dark line that runs either up or down or right on through your belly button. Apparently we’ve all got that line already — it’s called the linea alba and is usually the color of your skin or even a little lighter. But since a LOT of skin-related stuff tends to get darker during pregnancy (like moles, freckles, areolas, genitals), this line appears more visible from about the second trimester on. And the darker your complexion, the darker the line. Usually. (Mine was barely noticeable last time and is completely invisible so far, but my fair-skinned sister had a pretty prominent one.) The line will eventually lighten a few months after you deliver, while other dark spots like moles and areolas and such, are probably going to be like that for good.

Zits! Pimples! Breakouts! Acne! Some women get them on their face, some on their body, others get bona-fide eruptions unlike anything you’ve seen this side of junior high. It’s a downside of the “pregnancy glow,” which is really just increased blood flow to your cheeks and extra secretions by your oil glands. Bleh! I know! Go with a very gentle face cleanser or oatmeal scrub and wash the afflicted areas at least twice a day. Make sure all your makeup is oil-free, but stay away from harsh astringents or cheap oil-fighting products. They’ll just make your glands overcompensate and produce more oil. The good news is that this is NOT a sign that you’ll be stuck in permanent pizza-face mode forever — most pregnancy acne is just that, and your skin WILL return to normal soon after birth.

And let’s not forget all the other weird, weird things that your skin might do during pregnancy. There’s heat rash, chafing and all-over itching from where your skin stretches. There’s plaques of pregnancy or PUPP, which is a raised and red pimply eruption of itchy skin on the abdomen or thighs or buttocks. It’s alarming looking but harmless, and will go away after delivery. Keep it moisturized and apply an anti-itch cream if it drives you crazy. There’s skin tags. Red palms. Tiny red raised freckles on your torso and extremities. Spider veins. Burst blood vessels on your face (and eyeballs!). And probably dozens of other strange lesions and bumps and marks that nobody ever talks about.

A visit to the dermatologist can really put your mind at ease if you notice anything really unusual — while mole growth and new moles are very normal, pregnancy is NOT immunity against skin cancer, so don’t hesitate to call and get checked out. Your doctor will probably shrug and tell you that will probably go away after delivery and in the meantime just , but it’s better to be safe than sorry, of course.

Oh Yeah, THIS:
The STATE I manage to work myself into while trying to determine if I am, in fact, experiencing “decreased fetal movement” or if the kid is just taking a nap.

New This Time Around:
While we’re on the subject of skin changes, let me tell you about my backne. And chestne. Shoulderne. Neckne. Yuck yuck yuck. So far no brand of body wash or bar soap seems to have any effect on it.

THE SECRETS OF HAPPY MOMS

THE REASONS FOR STRETCH MARK FORMATION IN WOMEN