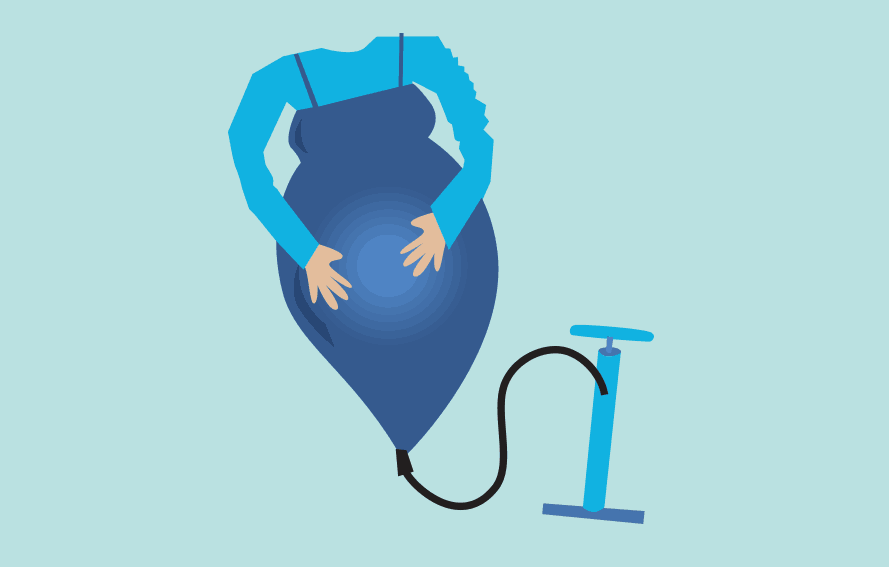 I don’t really have a single, streamlined topic for this week, other than 24 WEEKS? WHAT? WHAAAAAT?

I had my first Braxton-Hicks contractions over the weekend — a bit earlier than last time, I think, or maybe I just assumed they were gas. (Pregnancy is so gaseous, people, I will just never get over it.)

Braxton-Hicks contractions are…well, they’re contractions of your uterus. A sudden tightening, sort of like a menstrual cramp, but…not really like a menstrual cramp. Sometimes they hurt in a stabbing, gasping-for-air sort of way, and other times they don’t hurt at all. Everything just clenches up for a few seconds or a minute (if you put your hand on your stomach you can sometimes even feel the sudden rock-hardness of your uterus), and then everything relaxes, like nothing happened at all. They aren’t dangerous or an indicator of early labor (unless you have more than four an hour, or notice bleeding or leaking fluid) — they’re partly your body’s natural warming up for the real thing and partly just a total flipping annoyance.

I was driving home when the first one hit — a sharp clenching sensation took over my entire pelvic region and remained steady for what felt like forever, but was probably less than a minute. My mouth involuntarily opened in a gasp or cry that I never really got out, and then it was over. I got home and quickly grabbed a big glass of water and a stack of throw pillows to prop under my feet. Dehydration can play a big part in these sorts of contractions, and I remember having to practically quadruple my water intake during the third trimester to keep them under control.

The next one came the next day, while we were walking through the mall. This one hurt. A lot. More pain than a mere tightening, and I suddenly had to stoop over a little bit and walk very slowly. It refused to stop until I sat down. At some point Jason turned around and realized he’d left his pregnant wife all the way back by the Foot Locker, and instinctively headed towards the nearest vending machine for a bottle of water. He remembers this part too! Pregnancy: it’s just like riding a really awkward and flatulent bicycle.

With my first pregnancy, I was always trying to get friends and family members to “describe” labor to me. How will I know? What does it really feel like? Cramps? A backache? Appendicitis? Uh…gas?

I was always frustrated when a woman would describe her early labor as “feeling funny.” What do you MEAN you “felt funny?” That is supremely unhelpful, and I shall blame you when I accidentally deliver my child at the grocery store because I felt more “stabby” than “funny.”

And now, when asked to describe my own labor story (or even when I’m NOT asked, because lo, do I ever love to tell that story), I admittedly start off by saying that something just felt sort of “off” that day. I was 40 weeks to the day, and had been having a TON of Braxton-Hicks contractions all week, with a marked increase in the past day or two. (The only time I DIDN’T have any contractions was during the TWO doctor’s appointments I’d gone to, when that sort of thing actually gets monitored and counted. Those appointments revealed nothing but a sealed-up-tight cervix and a completely quiet and laid-back uterus.)

I’d lost the mucous plug (which is…yeah, exactly what it sounds like and it’s also known as “bloody show”), officially hit my due date, was working from home and rolling around like a giant beached whale while I contracted all over the place, but my first real indication that something was happening was just…feeling funny. I realized I was taking these deep breaths — not on purpose, but I was. I was pacing and stretching my back and closing my eyes during the contractions. All these tiny little involuntary things you see women on those birthing shows do during labor that you don’t even realize ARE involuntary.

But I wasn’t in pain, really, at least nothing beyond what I’d experienced during regular old Braxton-Hicks contractions. I also didn’t notice a clear pattern in the contractions, since the timing still seemed to be pretty all over the place. It wasn’t until much later than evening when the contractions started getting regular and closer together that I felt timidly confident enough to call my doctor and slowly make my way to the hospital (AFTER one more walk around the block, a shower, a complete repacking of the bag and of course, updating my stupid BLOG).

By the time we got to the hospital it was around one in the morning and I was just over three centimeters dilated — exactly what I needed to be admitted rather than sent back home. I was fully dilated (10 centimeters) and pushing about eight hours after that.

And yet, looking back, I realize that I was slowly moving into active labor for most of the afternoon. It probably “officially” started around noon, a good 12 hours before I got to that full-on, not-to-be-confused-with-anything-else stage of labor.

So if you’re reading this and fretting about knowing the difference between false labor and the real thing, whether that’s a real contraction or a Braxton-Hicks, or are just hoping to Not Be That Pregnant Woman who rushes to Labor & Delivery during every bout of indigestion, allow me to use my bottomless arsenal of words and natural gift of descriptive language to tell you exactly how to know if you are in labor:

You’ll feel sort of…funny. You’ll spend some time convincing yourself that you aren’t in labor, grumble that calling your doctor or getting in the car is just a surefire way to make it all stop dead in its tracks, and then you’ll still wait another hour to call the doctor because he said to call only after an HOUR of regular contractions and it’s only been 45 minutes and that one was kind of irregular so should we start counting from zero again? And then maybe you’ll change your mind and decide that you ARE in labor and there will be a frantic scramble for bags and cellphone chargers and camera batteries and your partner will ask you over and over in the car if this is really “it” or if “it” has stopped and then you’ll get to the hospital and hopefully, probably be in actual labor and get to stay until you have your baby, who you will hold and stare at and be completely unable to believe that just a few hours before was just a funny feeling in your stomach somewhere.