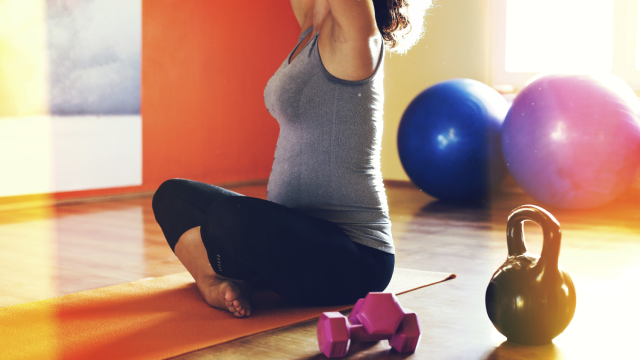 Most people think of Pilates as a new form of exercise because of its recent surge of popularity in the fitness and healthcare industry. In reality, Joseph Pilates was invented about 80 years ago.

Pilates was a sickly child with asthma. To help fight his illness and build his strength, he experimented with various mind-body disciplines and later became an accomplished skier, diver, gymnast, and boxer. While in captivity during WWI in England, he taught fellow detains his concepts and exercises that he developed over 20 years of self-study and apprenticeship in yoga, Zen, and ancient Greek and Roman physical regimens.

During this time, Pilates began devising the system of original floor exercises known today as “Pilates mat work”. Within a few years, he became a nurse to the many internees under care with wartime disease and physical injury. Here, he began devising exercise devices to restore the patients by taking springs from the beds and rigging them to create spring resistance and “movement” for the bedridden. This “system” formed the foundation for his style of body conditioning used today. 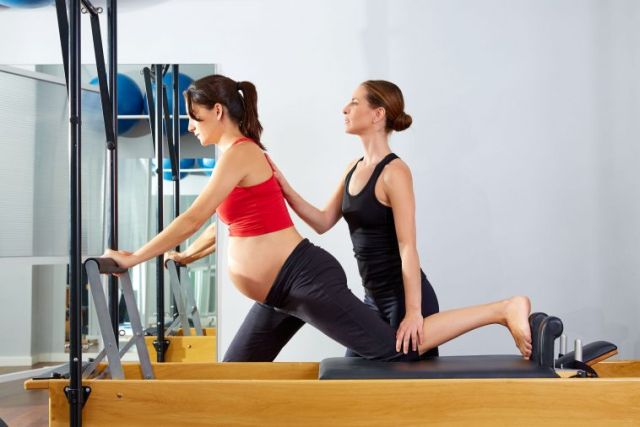 In many ways, Pilate’s equipment today is not much different than it was back then. The use of spring tension, straps, and supports for back, neck, and shoulders are the same uses for the equipment today. The nature of the equipment is to both challenge and support the body as it learns to move more efficiently.

With the determination to help others achieve better health, Pilates opened his first studio in New York in 1926 where he used his exercise apparatuses and more than 500 movement therapy exercises to help rehabilitate athletes and dancers. For over 60 years this form of exercise was a well-kept secret – but dancers, athletes, physical therapy patients, and fitness enthusiasts have relied on this Pilates method to attain and stay in top physical form.

The benefit of Pilates’ movement therapy exercises for women thru pregnancy and post-partum is mostly misunderstood. Simply put, Pilates is a safe and effective approach to exercise for pregnant women to assist with breathing, body alignment and to recover body shape and tone after birth. 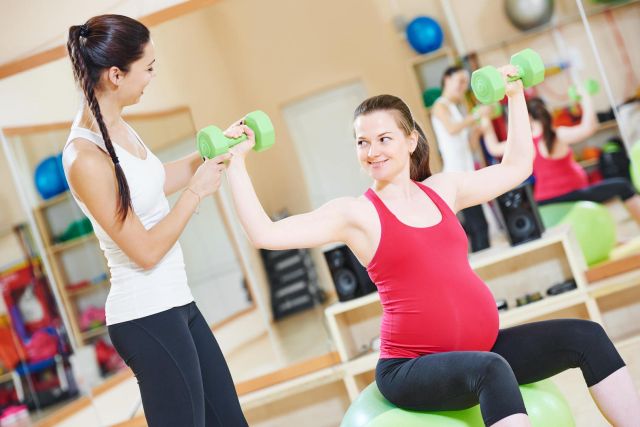 Pilates focuses on breathing, which promotes relaxation and helps activate the Trans-versus abdominus. The trans versus abdominus is the deepest of the abdominal muscles and is responsible for supporting the lumbar spine and pelvic area at a time when ligaments are lax due to the natural hormone relaxing excreted by the body during the pregnancy and nursing stages. Lateral breathing also inherent in Pilate’s fitness, which improves rib cage mobility when the range of motion in the diaphragm is limited due to the high position of the baby in the third trimester.

Back pain is a common side effect of pregnancy. Unless the abdominal muscles, pelvis, and spine are strengthened, problems with the back can occur. Strengthening the Trans versus abdominus (“abs) through guided Pilates; movements will not only improve back pain and postural alignment but will aid women during labor for a much quicker & safer delivery. Research has shown that activation of the transverses abdominus also activates the pelvic floor, keeping these muscles strong and supple for the birthing process. This can also help with any incontinence that you may experience during and after pregnancy.

The nature of movement in Pilates exercise is low impact and allows pregnant women to exercise effectively without experiencing any undue stress on the now lax joints, or an increased heart rate. Pilates also involves many stretching and toning exercises that help to maintain hip flexibility and stamina, which is essential for well-being and preparation for childbirth.  These exercises are aided and supported by Pilate’s apparatuses such as the reformer: a moving carriage on a bed; the wunda chair with springs to create resistance and the trapeze table to hang from. Pilate’s exercises also can be performed on a mat with small props such as pillows or cushions which supports the head, the magic circle, foam rollers and therabands for extra resistance. 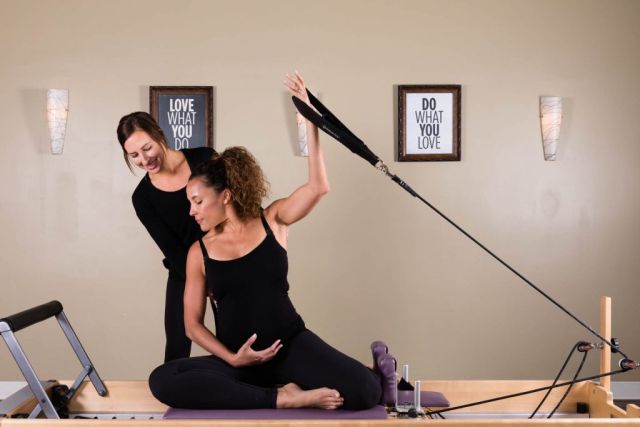 Most exercise modifications happen during the second and third trimester due to the ever-increasing belly. All Pilates movements, at this point, are best done seated upright or side lying. However, you can work flat as long as the head is elevated with pillows at 30 degrees above the heart for no longer than 5 minutes, turning to the side for a break.  This ensures natural blood flow and oxygen to the A popular exercise among pregnant Pilates enthusiasts is legwork on the wunda chair. It involves sitting on a small stool with springs attached to a lever and pushing the lever down with your feet. This Pilates movement provides conditioning for the legs and activation of the abdominal muscles, which stabilize the pelvis.

Remember it’s very important that your Pilates instructor is certified and has experience in working with pregnant women.